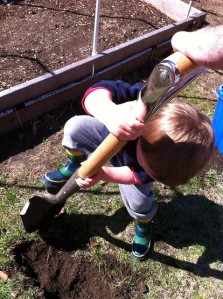 We finished putting together the new, triangular raised bed. First we marked around the bed to see where we had to dig. Last time, we just put the bed on top of the ground, and everything that was growing there just pushed right up through the foot of soil to compete with what we tried to grow. This time, we scraped off the top layer of soil, grass, and weeds to hopefully cut back on this. After filling three old recycle bins of soil, we had a triangular hole in the ground into which we placed the bed frame. The next part, I did while the kids blew bubbles and played with chalk. I
moved the compost from our two composters into the frame. It was a stinky job as some of it had not fully broken down. I then dumped some bags of topsoil on and we all worked on spreading it around over the compost. That was enough for one day, so we covered the frame with deer netting to keep off the squirrels and other animals that like to dig in the dirt.

The next day, we worked on creating the poles that will hold up the netting and allow us to access the garden while keeping varmints out. My daughter helped cut the PVC pipes to length, but I did the gluing up. That glue and primer are pretty toxic stuff. We then all worked on measuring, cutting, and attaching the netting to the frame structure, and by the end of the day, we had a new bed ready for our lettuce when it gets big enough to plant outside. We also planted my daughter’s bean plant that she started at school.